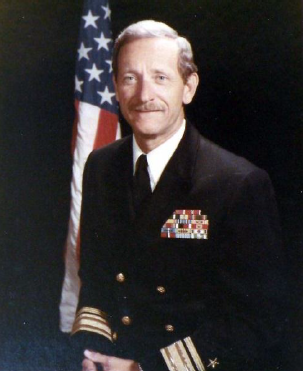 Upon his release from active duty in June 1946, RADM Rogerson while in an inactive status in the Naval Reserve, attended the University of Texas. Upon graduation and subsequent return to active duty during the Korean conflict in July 1950, RADM Rogerson served in USS LST 1082 as First Lieutenant and Gunnery Officer until July 1952 when he reported to USS LUZERN COUNTY (LST 902) as Commanding Officer.

In October 1957, he was assigned to the Staff, Commander Amphibious Force, U.S. Pacific Fleet as Force Gunnery and ASW Officer. From June 1960 until August 1961 he served as Executive Officer, USS SPROSTON (DD 677) followed by duty as Commanding Officer, USS RUPERTUS (DD 851) from August 1961 until March 1963.

RADM Rogerson then was assigned to the Office of the Chief of Naval Operations Plans and Policy Branch, Progress Analysis Group until June 1965. He attended the School of Naval Warfare at the Naval War College, Newport, Rhode Island from June 1965 until June 1966.

Following graduation from the Naval War College, RADM Rogerson reported as Commander Destroyer Division 212, serving until June 1967 when he reported as Operations Officer and subsequently Chief of Staff and Aide to Commander Amphibious Group One.

Personal decorations include the Legion of Merit and Combat “V” and a gold staff in lieu of second award, two Meritorious Service Medals, the Bronze Star with Combat “V”, the Navy Commendation Medal and the Combat Action Ribbon. In addition to campaign and service medals, RADM Rogerson has received the Navy Unit Commendation as well as the Republic Vietnam Cross of Gallantry.