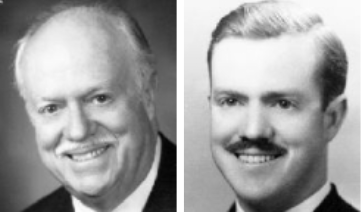 Michael Hardie Bagot, 89, passed away peacefully on February 25, 2012, surrounded by his loving family. He was born on April 5, 1922 in Whistler, Alabama. Mike is survived by his beloved wife of 59 years Elizabeth Laville Bagot, sons Michael Hardie, Jr. (Bettye), Eugene F., III (Dona), daughters Germaine B. Vorhoff (Robbert), Elizabeth B. Hughes (Philip), Barbara B. Waller (David), Helen B. Dreyfus, 16 grandchildren, and four great-grandchildren. He was predeceased by his mother and father, Eunice Zoder and Eugene F. Bagot, his brother Eugene F. Bagot, Jr., his sisters Ruth Coyle Bagot and Eunice B. Nicks, and his son-in-law Richard B. Dreyfus.

When Mike was a young boy, his family moved from Whistler to New Orleans where he attended St. Stephen’s School and Alcee Fortier High School. He received his undergraduate and law degrees from Tulane University. At Tulane he was a member of Kappa Sigma fraternity.

He was a veteran of the U.S. Navy, having served in the Pacific during World War II as a lieutenant on the USS Colorado in the battles of Tarawa, Kwajalein, Eniwetok, Guam, Saipan, Tinian, Leyte Gulf, Mindoro, Luzon, and Okinawa. He was aboard the Colorado when it was one of the first ships to enter Tokyo Bay as part of the United States occupying force at the end of the war.

Mike further served his community as President of the Tulane Naval ROTC Alumni, the Tulane Emeritus Club, the Bienville Club, Our Lady of Lourdes School Board, the Mercy Academy Fathers’ Club and Advisory Board. He enjoyed memberships in the Southern Yacht Club and several carnival organizations. Mike was the attorney and advisor for The Sisters of the Good Shepherd. He also served as a Eucharistic Minister for Holy Name of Jesus Church. Mike’s family expresses deep appreciation and gratitude to the staff of St. Anna’s Residence, which provided such loving care to him over the last two years.

Published in The Times-Picayune from February 26 to February 29, 2012