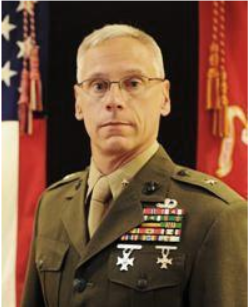 Brigadier General Machut was born and raised in Chicago, Illinois. Upon receiving a Naval ROTC Scholarship, Brigadier General Machut attended Tulane University in New Orleans, graduated with a Bachelor of Science in Civil Engineering in 1982 and was commissioned a Second Lieutenant. As a company grade officer, he served with 7th Engineer Support Battalion at Camp Pendleton, as a platoon commander, Company XO and the Battalion Assistant Operations Officer. He further served aboard the USS Forrestal (CV-59), as the Marine Detachment Executive Officer / Guard Officer.

As a Lieutenant Colonel, Brigadier General Machut was in command of 6th Engineer Support Battalion when the entire battalion was activated in support of Operation Enduring Freedom/Operation Iraqi Freedom in 2003. He led the battalion into Iraq at the commencement of the war, providing bulk fuel and water support for IMEF forces during the campaign to Baghdad. Returning the battalion back home after 7 months, he continued to prepare companies for further deployments in support of OIF. Promoted to Colonel in 2004, he relinquished command later that year.

Promoted to his current rank in August 2010, Brigadier General Machut was assigned as the Commanding General, Marine Corps Mobilization Command in November 2010. He assumed the duties of his current assignment in September 2011.

Brigadier General Machut was selected for and attended the U.S. Army War College through their Department of Distance Education. He graduated in July 2007 with a Masters in Strategic Studies.

As a civilian, Brigadier General Machut is a registered Professional Engineer in the State of Illinois.

Brigadier General Machut’s personal decorations include the Bronze Star, the Meritorious Service Medal with a gold star, the Navy Commendation Medal with gold star and the Navy and Marine Corps Achievement Medal.