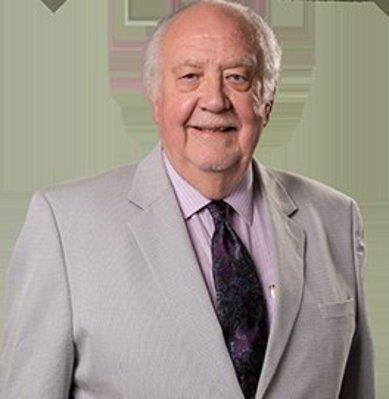 Louis Hanner Watson passed into heavenly glory on August 8, 2016, surrounded by his loved ones at St. Dominic Hospital in Jackson, Mississippi. Louis was known as a “Buddy” to many, a nickname given to him by his older brother.

He was born on March 15, 1938, at Old Baptist Hospital in Jackson to William Harvey Watson, Jr. and Sarah Brown Hanner Watson. Louis’s father, Billy, was on staff at the Mississippi State Sanatorium in Sanatorium, Mississippi. As Louis often recounted, his family moved to Meridian, Mississippi, on July 2, 1944, “complete with [his grandfather’s] dog kennel strapped to the top of his 1935 Packard Sedan and filled with [their] remaining flock of English Leghorn chickens. As [his] dad fondly remembered, they faithfully laid eggs daily until they expired, one by one.”

Louis attended school in Meridian where he met Frances Egger in the seventh grade. Louis was the valedictorian of the Meridian High School Class of 1956 and received numerous awards, including the Marks Rothenberg & Company award for the top science student.  Louis attended Tulane University in New Orleans, Louisiana, on a Procter & Gamble scholarship where he pledged Kappa Sigma, eventually becoming fraternity President. In his sophomore year, he earned a Naval ROTC scholarship, rose to Battalion Commander and was inducted into the National Society of Scabbard and Blade. He earned a Bachelor of Science degree in Mathematics, was inducted into the Louisiana Alpha Chapter of Phi Beta Kappa, and was also a Who’s Who selection.

Upon graduating Tulane, Louis was commissioned as an Ensign in the United States Navy and volunteered for submarine service. Louis served from 1960-1965 as an officer aboard the submarine USS Grampus (SS-523). Based in Norfolk, Virginia, Louis patrolled the Atlantic and the Grampus formed part of the naval blockade of Cuba in 1962. Louis was the officer responsible for the complete overhaul of his submarine in the Philadelphia Naval Shipyard.  On October 14, 1961, Louis and Frances married at Central United Methodist Church in Meridian. They lived in Norfolk throughout Louis’s naval career (where Frances taught high school).

After completing his naval service in 1965, Louis and Frances moved to Cambridge, Massachusetts, where Louis enrolled at Harvard Law School, graduating in 1968.

Louis and Frances moved to Scarsdale, New York, where Louis became in-house counsel for Esso International (later Exxon). Longing for Mississippi, they moved back in 1969. Louis practiced law in Jackson, Mississippi and served as an Adjunct Professor at Mississippi College School of Law from 1975-1979.  In 1988, Louis became a shareholder in the firm of Wise, Carter, Child & Caraway. In his distinguished career, Louis practiced in the areas of employee benefits, estate and retirement planning, and taxation. He was inducted into the American College of Tax Counsel, the American College of Trust and Estate Counsel, and as a Fellow of the Mississippi Bar Foundation. His fellow lawyers presented him with the Capital Area Bar Association’s Professionalism Award, recognizing his lifelong commitment to serving his profession and his clients.

Louis served in numerous civic leadership positions including service as President of the Mississippi Symphony Board and President of the Mississippi Opera Board. He was a founder of the Covenant School for the Arts, served on the advisory board of St. Dominic Hospital, and was a Book Buddy mentor at Casey Elementary School. He enjoyed his membership in the Rotary Club of Jackson and received numerous perfect attendance awards.  Louis and Frances became faithful members of Covenant Presbyterian Church when they moved to Jackson. Louis served as a Deacon, an Elder, and a Sunday school teacher. Louis lovingly proclaimed his Christian faith, and he took comfort in the following portion of the Westminster Shorter Catechism: The souls of believers are at their death made perfect in holiness, and do immediately pass into glory….

Louis asked that the following message be read to his family and friends:
“Before my earthly death, I write this message from my heart to be read after my earthly death by my beloved family, my dear friends and my fellow Christians.  Thank you for loving and caring for me and my gracious Frances in times of great joy and happiness, in times of sickness and infirmity and in times of grief and sadness. Your steady and enabling strength, encouragement, support and affirmation, when each of you was needed, gave my life worth, deeper meaning and lasting endurance.”

Visitation will be held at Covenant Presbyterian Church in Jackson, Mississippi, on Wednesday, August 10, 2016 from 5:00 p.m. to 7:00 p.m., and Thursday, August 11, 2016 at 9:00 a.m. A funeral service will follow immediately at 10:30 a.m. at Covenant. A graveside service will be held afterwards at Magnolia Cemetery in Meridian, Mississippi. Following the service, all are invited to the home of Louis’s sister, Sissie Wile, in Meridian at approximately 2:30 p.m.