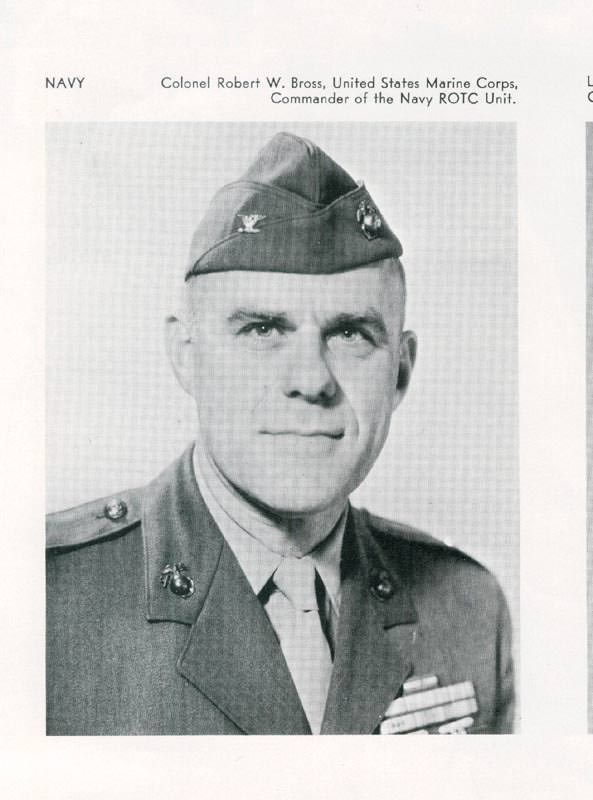 Colonel Bross was the Unit CO of Tulane NROTC

BROSS Col. – Robert Bross (USMC, Ret.) of Atlantic Beach, passed away Thursday, January 25, 2007 at the age of 86. Robert was born in 1920 in Babylon, NY, son of William Warren Bross and Lillian Allen Leute Bross. He graduated from Princeton University in 1941 and received his Masters degree in Slavic languages from Tulane University in 1970. For 27 years he served in the United States Marine Corps first serving in World War II in the Pacific Theater. His military career included serving as Assistant Naval Attaché to the American Embassy, Moscow and Staff Secretary to the Commandant at Headquarters Marine Corps, Washington, D.C. During the 1960s, Robert was Commanding Officer of the 6th Marine Regiment at Camp Lejeune, NC which was involved with the Cuban Missile Crisis, Professor of Naval Science at Tulane University and stationed in Seoul, Korea with the UN Command and later advisor to the Republic of Korea Marines fighting in Vietnam until he retired in 1968. Other tours of duty during his career included China and Japan. After his retirement from the Marine Corps, he taught foreign languages at The Episcopal High School in Alexandria, VA later becoming Assistant Headmaster. He was a loving husband to Pat for 55 years and a wonderful father to Gary Bross (and Pat) of Savannah, GA; Alan Bross (and Betsy) of Virginia Beach, VA and Nanci BrossFregonara (and Jim) of Elkins, WV. He had four grandchildren: Colby and Bobby Bross of Atlanta, GA and Julia and John Fregonara of Elkins. He is also survived by a sister Nancy (and Robert) of Honey Brook, PA as well as many nieces and nephews and dear friends. Robert and Pat moved to Atlantic Beach in 1991 where he was a member of Christ Episcopal Church and active with the church choir, Vintage Players theater group and World Affairs. He enjoyed golf, travel and his family. A memorial service will be held Monday, Jan. 29 at 11 a.m. at Christ Episcopal Church San Pablo, officiated by The Reverend Anne Bridgers and an interment will be at Arlington National Cemetery later this spring. In lieu of flowers, donations may be sent in his memory to the National Parkinson Foundation (800) 3274545 or the Northeast Florida Community Hospice (904) 8863883. His family wishes to express their deepest appreciation to the Northeast Florida Community Hospice. Please Sign the Guestbook @ Jacksonville.com