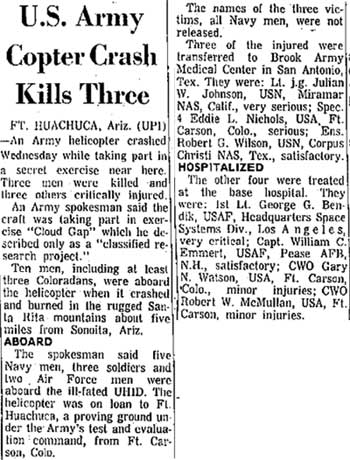 After service in Vietnam, Lt JG Fobes died in a helicopter crash while participating in a classified training operation. A/C crashed and burned in the Santa Rita mountains about 5 miles from Sonoita while taking part in operation Cloud Gap (classified research project). A/C was attempting a mountain peak landing and at approximately 150′ above landing site, rotor RPM dropped to 6400. Pilot applied power for go-around but A/C continued to descend and lose RPM. At 20′ AGL, A/C suddenly turned right and settled down to ground, M/R blades hit rock outcropping next to landing area, pitched up then fell down the side of mountain, rolling several times coming to rest far below the saddle and was consumed by post-crash fire.
*Bendick and Johnson died 1 day later.