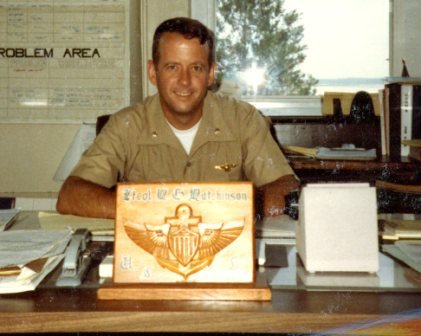 Gray Hutchinson entered the Marine Corps through NROTC after graduation from Tulane University in 1966. He earned his “Wings of Gold” in early 1968. After transition training for the F-4 Phantom, he flew combat missions with Marine Fighter Attack Squadron-542 in the Republic of South Vietnam. He also served as a Forward Air Controller with 2nd Battalion 5th Marines in the Republic of South Vietnam. Gray had additional tours with Marine Fighter Attack Squadrons 201, 312, 323, and 333. He was a graduate of the Navy’s elite “Top Gun” school and served as a T-2 Buckeye fighter instructor with Training Squadron 9 in the Navy Training Command at Naval Air Station Meridian, Mississippi. He commanded Marine Air Base Squadron-31 in Beaufort, South Carolina. After his command tour, he transferred to Marine Corps Air Station Cherry Point, North Carolina where he served as the Air Station Operations Officer. During this tour he earned an MBA from Boston University. Gray’s last duty assignment was as Executive Officer of Navy Strike Fighter Squadron-125, the Navy’s largest F/A-18 training squadron, at Naval Air Station Lemoore, California.
After retirement from the Marine Corps in 1989, Gray continued flying military aircraft as a contract pilot in the Naval Flight Officer training program at Naval Air Station Pensacola, Florida. Gray accumulated over 10,000 hours of flight time in 35 years of flying.
Tragically, Gray died in an aircraft accident while on a training flight on May 8, 2002.

From hall of honor Smithsonian Air and Space Museum