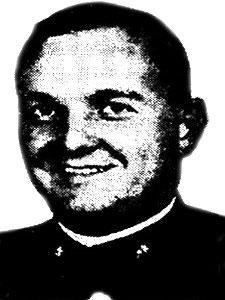 The President of the United States of America takes pride in presenting the Silver Star (Posthumously) to Second Lieutenant Joe E. Allen (MCSN: 0-103089), United States Marine Corps, for conspicuous gallantry and intrepidity in action while serving as a Platoon Commander with Company D, First Battalion, Fifth Marines, FIRST Marine Division (Rein.), FMF, in connection with combat operations against the enemy in the Republic of Vietnam. On the evening of 24 May 1968, Second Lieutenant Allen’s platoon established an ambush on a suspected enemy infiltration route in Thua Thien Province. Alertly observing a numerically superior North Vietnamese Army force moving near his position, he immediately adjusted mortar fire on the enemy and quickly led his platoon to an advantageous position from which the Marines commenced delivering accurate fire upon the hostile force. Although painfully wounded in the initial moments of the fire fight, he boldly moved among his men, shouting words of encouragement and directing their fire. Realizing the seriousness of the situation, Second Lieutenant Allen was maneuvering his squads into an assault formation when he sustained a second wound from an enemy hand grenade. Steadfastly refusing medical aid, he advanced to the most forward position and fearlessly led a determined assault on the enemy positions until he fell seriously injured by the hostile fire. Inspired by his bold leadership and resolute determination, his men continued the attack, killing ten enemy soldiers and seizing numerous weapons. By his courage, aggressive fighting spirit and unwavering devotion to duty, Second Lieutenant Allen upheld the highest traditions of the Marine Corps and of the United States Naval Service. He gallantly gave his life for his country.