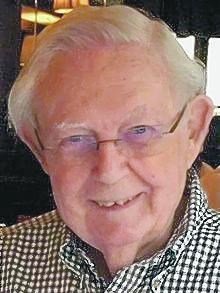 George Murphy Herbert Markey, Jr. passed away peacefully at his home in Metairie on Thursday, June 17, 2021, with his loving wife of 25 years, Josie, by his side. He was 92 years old. George was a native of New Orleans having been born on Desire Street on January 12, 1929. He is survived by his wife Josephine Hay Markey, his children Patricia Hanley (Tom) of Houston, TX, Germaine Brupbacher (Guy) of Pass Christian, MS, George M. Markey, III and three stepdaughters, Lisa Hay Rourke (Brian), Elizabeth Hay Roberts (John) of Houston, TX and Margaret Hay. He is also survived by his loving sister, Patricia Markey Burke, 8 grandchildren and 2 great-grandchildren. George was predeceased by his wife of 44 years, Joyce Hebert Markey, his parents George Murphy Herbert Markey and Bertha Castrogiovanni Markey as well as his brother-in-law Michael J. Burke. George received his undergraduate degree in Geology from Tulane University before serving his country as a member of the U.S. Navy during the Korean War. Upon completion of his military service, George went on to receive his master’s degree in Geology from LSU-Baton Rouge. He began his career as a Geologist with Gulf Oil Company and continued to work in the oil and gas industry throughout his professional life. When he retired in 1985, he and his then wife, Joyce, enjoyed spending the majority of their time at their home in Pass Christian, MS. In 1996, he married Josephine Pope Hay. George and Josie spent the majority of their 25 years together residing in the French Quarter. While living in the Quarter, they enjoyed hosting parties in their home for their large circle of friends, the favorite of those events being their annual “hot dogs and champagne” get-together on Fat Tuesday afternoon. They also enjoyed opening their home to numerous home tours and remaining active in the French Quarter community.