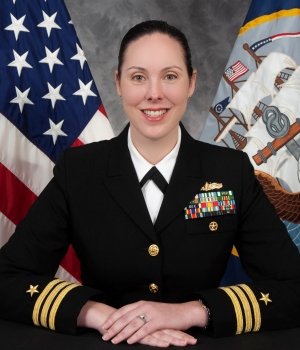 Lida Pardue Cooper (2004) was a featured speaker at the Tulane Professional Development Series, Women Making Waves 2022.  She was a panelist on the Prioritizing Diversity and Inclusion event on March 16, 2022.

Lida Pardue Cooper graduated from Tulane University and was commissioned through Tulane Naval Reserve Officer Training Corps in 2004. She is a Lifetime member of the Alumni Association.  In 2011, she completed master’s degrees in International Development from Tulane University and National Security and Strategic Studies from the U.S. Naval War College.  Cmdr L Pardue Cooper is currently the Chief Staff Officer for Commander Fleet Activities Yokosuka, Japan.  She was the Executive Officer of Assault Craft Unit FIVE at Camp Pendleton, California. Her last sea tour was as the Commanding Officer of USS THUNDERBOLT (PC 12).

She follows in the footsteps of Commander Audry Oxley (2001) and Commander Katie (Hagen) Jacobson (2004) who gave presentations in 2020 and in 2021, respectively.