The President of the United States of America takes pride in presenting the Silver Star (Posthumously) to Captain James William McCarter, Jr. (MCSN: 0-85448), United States Marine Corps, for conspicuous gallantry and intrepidity in action while serving as Assistant Battalion Operations Officer with the Second Battalion, Fourth Marines, THIRD Marine Division (Rein.), FMF, in connection with combat operations against the enemy in the Republic of Vietnam on 14 October 1967. During Operation KINGFISHER, the Battalion’s night defensive position was subjected to heavy volumes of rocket and mortar barrages which inflicted numerous casualties. The devastating bombardments were immediately followed by a charging North Vietnamese force, which succeeded in a deep probe of Company G’s defensive position. Unconcerned with the countless losses inflicted on the North Vietnamese by the defending Marines, the frenzied enemy troops ran rampant within the company’s position, hurling grenades and saturating the area with accurate bursts of deadly fire. Although fighting gallantly, the company paid heavily with the loss of many Marines, including the Company Commander. Captain McCarter, upon receiving orders to take over Company G, fearlessly and without escort, proceeded towards Company G over 50 meters of perilous, fire-swept enemy terrain. He directed effective changes to unsuitable defensive positions within the company perimeter. Displaying exceptional professional skill, he quickly reestablished efficient communications within the company and assumed command via radio. Without regard for his own safety, he then moved out of a bunker into the deadly fire to personally assess the situation. As he moved from position to position, inspiring his men, he accounted for the deaths of several enemy troops in his path. As a result of his fearless actions, he was mortally wounded by an enemy grenade that exploded nearby. Captain McCarter’s exceptional professional skill, presence of mind in the face of extreme danger and unfaltering dedication to duty were in keeping with the highest traditions of the Marine Corps and of the United States Naval Service. He gallantly gave his life for his country.
Action Date: October 14, 1967 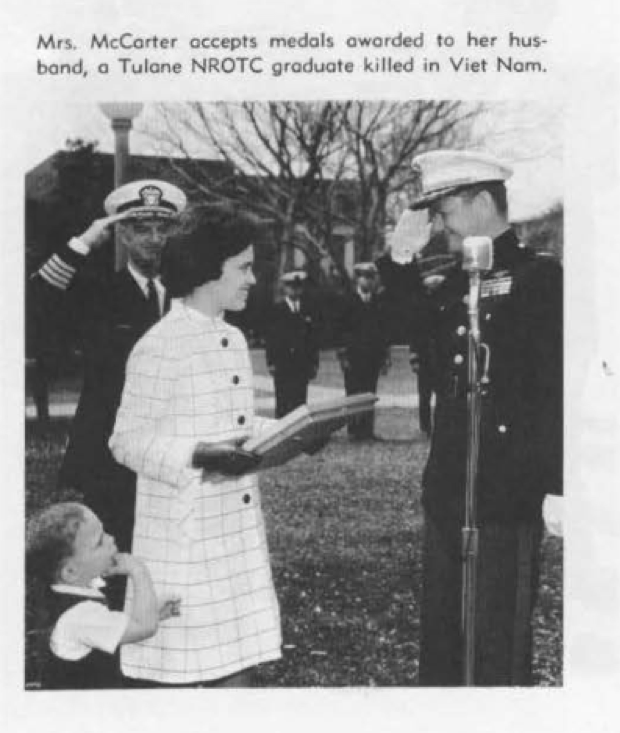