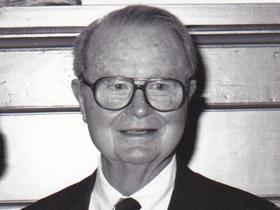 At 17, he enlisted in the U.S. Naval Reserve and transferred to the Naval Reserve Officer Training Corps when he went to Tulane University. With World War II on the horizon, he earned an officer’s commission in 1941 and volunteered for the submarine service, where he spent the next 19 years.

He commanded a submarine and later a division of six submarines. He served on 10 wartime patrols. He was executive officer on the USS Cavalla when it sank the Japanese aircraft carrier Shokaku, which had participated in the attack on Pearl Harbor, in the Battle of the Philippine Sea on June 19, 1944.

In retaliation, destroyers protecting the carrier dropped more than 100 depth charges trying to destroy the Cavalla, 56 of which came “very close,” according to the crew association’s website.

The ship’s crew earned a presidential citation, and then-Lt. Denègre earned the Silver Star for gallantry in combat. “His conduct throughout was an inspiration to the officers and men on his ship, and was in keeping with the highest traditions of the Navy of the U.S.,” his citation states.

In 1943, he married Louise Turberville Radford, who grew up in Kansas City, Mo. After the war, Navy duty took him and his family to Hawaii; New Orleans; Key West, Fla.; New London, Conn.; Arlington; and Brussels, Belgium. He retired in 1964. After his Navy duty ended, the family went to Kansas City, where he began his banking career, and he later worked in Alexandria.

The couple moved to Rappahannock Westminster Canterbury in 1998, where they spent the remainder of their days with their beloved Cavalier King Charles spaniels. Mrs. Denègre died Feb. 3.

His son, John Baldwin Denègre of Middleburg, noted, “All his life he quietly inspired people and guided them — the men and sailors in the Navy, the people to create Westminster Canterbury and in his work as a trust officer, helping people with their estates.”

Survivors, besides his son, include another son, Thomas B. Denègre III of Winston-Salem, N.C., and a daughter, Eleanor Radford Denègre of Alexandria; and three grandchildren.

A funeral will be held at 1 p.m. Friday, today, at Grace Episcopal Church in Kilmarnock, with burial at Historic Christ Church burying ground in Irvington. A reception will follow at 2:30 p.m. at Rappahannock Westminster Canterbury.

Mr. Denègre and his wife moved in 1972 from Alexandria to the Northern Neck, where they bought historic “Pop Castle” on the Rappahannock River, near White Stone.

He created the trust department at Chesapeake Bank in Kilmarnock, where he rose to senior vice president and senior trust officer before retirement.

He also sat on the bank board and was vice chairman of its Chesapeake Financial Shares Inc. holding company.

During his bank tenure, he led a group of citizens to create Rappahannock Westminster Canterbury, a continuing care retirement community that is one of Lancaster County’s largest employers; and its fellowship fund, which provides financial assistance to help seniors who do not have resources to reside at the facility.

He served as chairman of the trustee board from 1980 to 1985, when the facility opened, and was chairman emeritus at his death.

Mr. Denègre was one of three children born to a family in New Orleans that sailed and occasionally raced a Biloxi schooner in the Gulf of Mexico and on Lake Ponchartrain. In later life, he and his wife enjoyed sailing the waterways of the East Coast as well as in Europe.