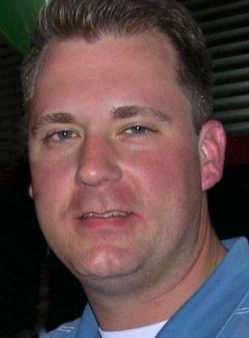 Daniel Elwood “Danny” Ruhl, 42, died peacefully April 19, 2015 after a hard fought battle with brain cancer. Danny was born in Jackson, MS on February 16, 1973 to the late Elwood Mason Ruhl and Catherine Mooney Ruhl. Danny was the youngest of eight children; he was preceded in death by his brother, Kevin Ruhl of Madison, MS.

Danny had a happy childhood in Jackson, attending St. Richard’s Elementary school. He excelled at sports of all kinds and loved spending summers at Hanging Moss Swim Club. Danny attended high school at St. Joseph High School where he lettered in football and basketball and graduated as salutatorian in his class. He made life­long friends and memories there.

After high school, Danny earned a Navy ROTC scholarship and attended Duke University as a freshman. He transferred to Tulane University as a sophomore to be closer to family and joined Kappa Alpha Order there. Danny loved his time in New Orleans and thought of it as a second home. Upon graduation, he was commissioned as an officer into the U.S. Navy and served in the Supply Corps during his years in the military. In the Navy, Danny’s favorite post was in Gaeta, Italy. He loved his time in the military and made friends everywhere he went. He completed his years in the Navy as an instructor at the Navy Supply Corps School in Athens, Georgia. It was here that he reconnected with a girl he dated years before.

Upon discharge from the Navy, Danny joined AmSouth Bank’s management program in Birmingham, Alabama. That same month he married his old flame, Allison Boone Ruhl, and they set off on a lifetime of adventure together in 2000. Soon after they were married, Danny enrolled in the Mississippi College of Law where he found his true calling. He excelled in law school, serving on the Mississippi College Law Journal as well as many moot court competition teams and was honored to graduate third in his class. After graduation in 2004, Danny joined the Jackson, MS law firm of McGlinchey Stafford where he practiced law for two years in the area of corporate litigation and bankruptcy. In 2006, he moved to the law firm of Copeland Cook Taylor and Bush where he continued to practice corporate litigation and bankruptcy. Danny enjoyed his work and got great satisfaction from mentoring young associates in his firm. He also coached the Mississippi College Duberstein teams for several years and was inducted into the Order of Barristers for his service. Danny was a member of the Charles Clark Inns of Court as well. He always looked for opportunities to serve and worked with Mission First Legal Aid along with several other legal nonprofits.

Danny had a strong faith and was an active member of St. James’ Episcopal Church where he served as an usher. He also spent seven years as the head of Judging Committee for the Red Beans and Rice Festival. Danny coached several of his children’s teams over the last years, but loved teaching them in the driveway the most. Danny loved cooking, travel, Duke basketball, and the New Orleans Saints. He loved life, but most importantly he loved his family. Although their time was too short, Danny and Allison lived a happy life together for nearly fifteen years. In addition to Allison, Danny is survived by their three children, Ainsley (11), Ella (9), and Reese (7). He is also survived by many loving brothers and sisters—Nancy Ruhl of Brandon, MS; Susan Ruhl and Debbie Ruhl of Ridgeland, MS; David Ruhl (Lissa) of Madison, MS; Mary Ruhl of Clinton, MS; Andy Ruhl (Janice) of Starkville, MS; and Patsy Ruhl Krass (Brett) of Gulfport, MS as well as nine nephews, five nieces and numerous aunts, uncles and cousins. He loved them all.

Danny was a loving husband, a devoted father and a loyal friend to all he met. He will be missed.

The family would like to thank Dr. Ruth Fredericks and her staff for their guidance as well as the staff at St. Dominic’s Hospital for their incredible care.

In lieu of flowers, the family requests that donations be made to the Advocacy Program at Mississippi College School of Law, 151 E. Griffith St., Jackson, MS 39201 or to St. Jude’s Children’s Hospital, Memphis, TN.