Eventually we were relieved by the GQ Bridge Team and I went to my GQ Post in Surface in CIC.  All our radars had been destroyed with the exception of our surface search radar, which we later found had half of its feed horn blown away.  We acquired what appeared to be two surface contacts make a classic torpedo boat attack and our three inch fifty guns fired on them.  The helo reported taking fire from the surface.  The gunners reported a secondary explosion.  Powers that be said later they were radar ghost.  Still don’t believe it.  Pucker factor huge.

The cruiser Long Beach at PIRAZ (Positive Identification Radar Advisory Zone or head air controller for the Gulf) dispatched their shotgun as we had no radio contact and had dropped off the Link-11 network.  We finally established comms via our helo and one working radio and were instructed to head for CTF-77 on a carrier while everyone figured out what to do.  After GQ I was directed to draft the OPREP-3 (Operational Report) indicating we had come under fire.  Unfortunately, still being a little foggy I wrote up the Codeword version for being attacked by Russians.  Nobody said anything later.  While conducting evaluations in the morning and picking up shrapnel we found a fuse with an NSN (National Stock Number on it.  How the heck did the North Vietnamese get a US Rocket?  Wrong.  Two Air Force aircraft thought we were a North Vietnamese SAM site.  Result equaled Mission Kill, one dead and 11 wounded. Courtesy of our missile fire control radars and EW shack above CIC there was no one wounded or killed in CIC.

Initial repairs in Subic Bay, We arrived there was only us and a broken British Fleet Auxiliary ship in port. For about two weeks there were only about 400 Fleet Sailors to sustain the local economy.  We then proceeded to Yokosuka for major repairs. We proceeded back to the Gulf via White Beach in Okinawa for missile system requalification.  This was the week Japan took control over the island and we were the first ones with Japanese Yen and the only ones who knew its value.  Bad few days for the body.  Send us back into the war zone.

By the time we arrived the Linebacker interdiction operations were fully underway.  Buffs (B-52s) joined in.  Then came Pocket Money the mining of NVN harbors and coast lines.  We returned to SAR stations, but with an extra task of stopping the resupply of NVN via Chinese Communist vessels that anchored off the coast.  Of course, they were inviolate and would load arms and food onto sampans.  They would also throw plastic wrapped 100 kilo bags of rice over the side and hoped they would float to shore.

WBLCs or Waterborne Logistics Craft as the Navy called sampans were fair game once they got a certain distance from the ChiCom ships.  Aircraft from the carriers under our advisory control would engage them.  DDs would close and shoot them and cut open the rice bails.  We had some motor whale boat (pre-ribs) cutting out expeditions and took back some tons of rice for orphanages in Subic.  The DDs on the gunlines had some harrowing experiences.  We were out of artillery and missile range, so it was more relaxing.  Almost started WWIII when I authorized an A-4 to illuminate a ChiCom ship.  The flare roman candled and landed on the deck while they were offloading ammunition.  According to the pilot someone kicked it over the side where it landed on the barge they used to load sampans.  Someone swept it over the side into a sampan, which they cut loose.  The crew of the sampan jumped overboard and a couple of minutes later the inevitable happened.

In January of 73 we were at South SAR, and I had fleeted up to CICO and was a Tactical Action Officer.  One morning the duty Radioman hand carried a message to me as the TAO as the Captain was asleep.  It was Top Secret, from CINCPACTFLT with the only addressee being USS Worden.  Gist was Proceed directly to Subic Bay at best possible speed. Huh?  Woke up the Captain who had the XO, OPS Boss and Chief Engineer to see him.  He requested by radio a meeting with CTF-77 and helod over to the carrier.  Theoretically we couldn’t leave station.  Turnover of South SAR was concluded in the Starboard Aft head with a helo lifting our classified material off to the carrier.

We then hiyakued (moved swiftly -each of us homeported in Japan knew at least 10 words of Japanese to butcher) to Subic saying WTH, etc.  We sent off a Top Secret LOGREQ (Logistics Request) which was declassified the day after arrival.  Heading into Subic Bay we received an in the clear request from Fortify (known to us all as the cruiser Chicago) for a Parrot or IFF check.  Since we knew the Chicago was supposed to be stateside, we were mystified.  Just then 4 little minesweepers including USS FORTIFY came steaming past us.  Pier side we were met by a Rear Admiral and a bunch of Captains.  We were to be the first mother ship for Operation End Sweep or the demining of NVN harbors and coast lines per the Paris Peace Accords.

After some modifications and embarking a CT van for COMINT (Communications Intelligence) we were off to the Gulf at best possible speed of the minesweepers to mill about smartly upon arrival.  One morning while on TAO Watch we received a call on Navy Red (secure UHF) from CTF-77 asking us what were those blips were around us?  My casual reply was something like “Oh those are the minesweepers.””  Followed by silence and then CTF-77 Actual will be sending a helicopter for your Captain.  Within the hour CTF 78, the CO and a Captain from CINCPACFLT flew to the carrier.  Good OPSEC.

Shortly thereafter we proceeded north to just off Haiphong.  Our ROE was not to act hostile in any manner.  We had our in-port deck lights on while drilling circles off Haiphong.  However, we had gun crew inside the ship near their weapons and missiles winged and finned in the Mouse House (Pre VLS.) At about 0600 with the sun rising, I was sitting TAO when EW shouted the 10 feet from their room to my console words to the effect that they had detected PT boat radars signal strength 5 (maximum) with a constant bearing.  Before the CO could be awakened two PT boats passed down our side. We didn’t bite at the provocation.

We started daily SH-3 helo ops to move the U.S. negotiating team to shore one day.  The next day they would ferry NVN officers to the ship.  I got to escort a junior officer and photographer around the weather decks.  I was accompanied by a CT (Communications Tech) Vietnamese language specialist.  Every time the officer told the photographer to take a picture of a piece of equipment, we would foil it except for our 3”50 guns.  They were designed in the late 40s.  A lot of pictures were taken.

After a few weeks we were relieved by a helicopter carrier (LPH) carrying specially equipped CH-53 helos.  It was all Kabuki as the mines were equipped to go dead after a period.  Combined with the air ops they served to get our POWs back.  Still not sure they all came back! 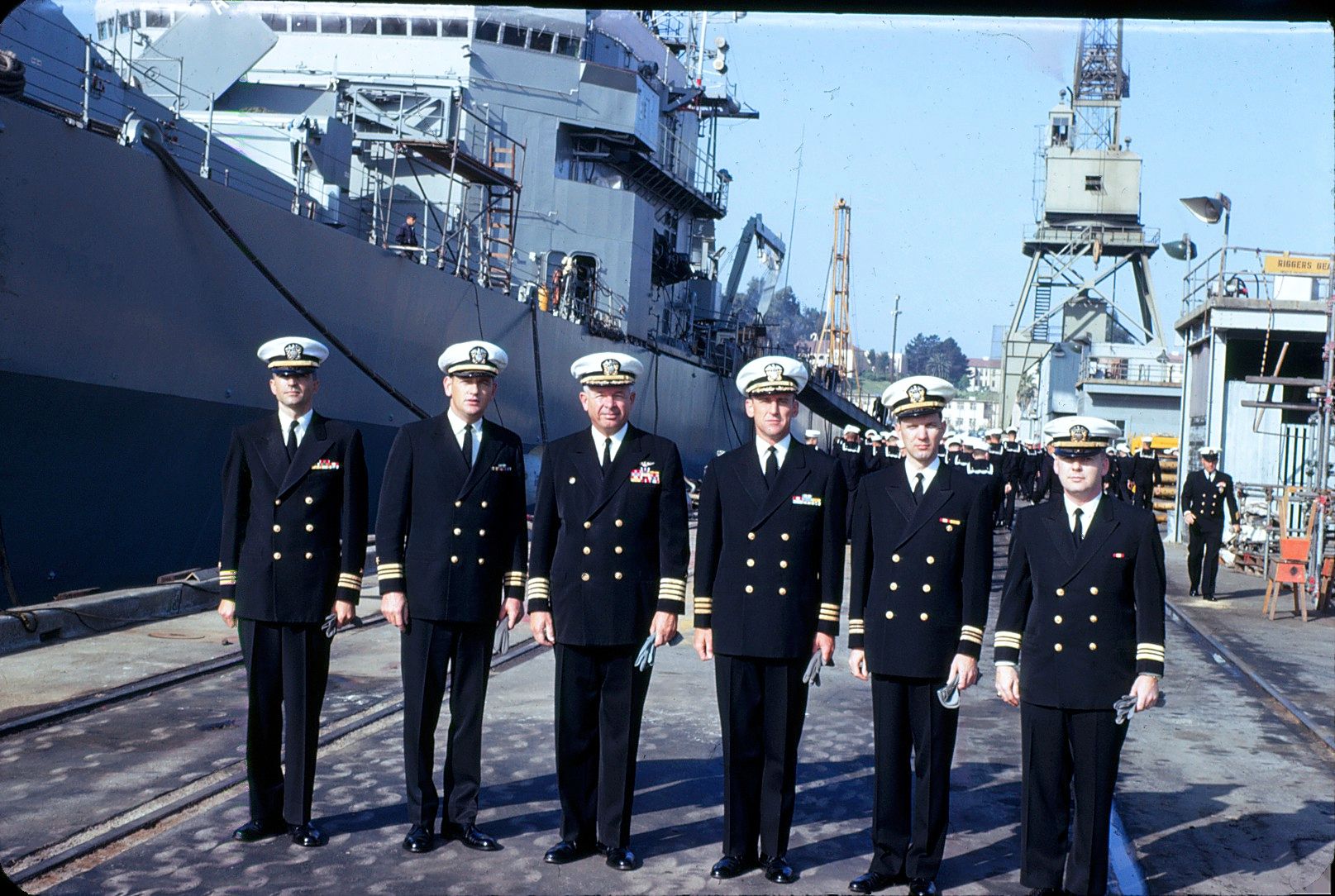 Operation Linebacker was the codename of a U.S. Seventh Air Force and U.S. Navy Task Force 77 air interdiction campaign conducted against North Vietnam from 9 May to 23 October 1972, during the Vietnam War.