Tulane University Naval ROTC was founded in 1938, one of two units added to the list of six which were already in existence. Thus began the story of Navy at Tulane, a relationship that has produced over 2500 Naval and Marine Corps officers all trained at the Navy Building, corner of Freret and McAlister Drive in New Orleans. This relationship with the US Navy was key to Tulane’s emergence as a nationally recognized university.

The information on this page was assembled by Dr. Brian Bourgeois, Captain USN (ret), class of 1982, with cooperation and assistance of Tulane Archivist Anne Case.

Shortly after his selection for President, but before he took the office, Rufus Harris was petitioned by the Tulane Alumni Association to establish a Naval ROTC unit at Tulane. This letter of March 5th, 1937 from Harry S. Kaufman, Jr., expressed unanimous support of the Tulane Alumni Association for establishing a Naval ROTC unit at Tulane. This was 2 years prior to the German Invasion of Poland.

The Naval ROTC program was started in 1926 and in 1937 there were only 6 Naval ROTC units in the country: University of California at Berkeley, Georgia Institute of Technology, Northwestern University, University of Washington, Harvard and Yale. Chester W. Nimitz had been the first Commanding officer of the Berkeley unit.

At that time, Tulane was not of the same caliber as these universities and would not have been a strong contender for a Naval ROTC Unit. The authors of “Tulane – the Emergence of a Modern University” characterized Tulane as follows:

Reply to LA League for Peace and Freedom, Pg1

Reply to LA League for Peace and Freedom, Pg1

The formal application for establishment of the Naval ROTC unit at Tulane was sent by President Harris on July 30th, 1937 to the Bureau of Navigation in Washington, DC. Among the documents shown about is the August 11, 1937 letter from Chester W. Nimitz, acting Chief of the Navy Department Bureau of Navigation, acknowledging President Harris’ application.

Naval ROTC at Tulane was not supported by all, and there was pushback. President Harris skillfully defends his position, making the case that this is ‘service to the country’ and an opportunity to bring in new curricula: “Tulane will be enabled to offer a variety of additional college subjects in which this locality is especially interested”.

Satire in The Tulane Hullabaloo, June 10, 1938
Prepare for War with a Navel Reserve – Dean Announces Unit will be Established Next School Session

Dean Marten ten Hoor announced the establishment of a U.S. Navel Reserve unit at Tulane beginning next autumn. Purpose of the unit will be to save up a supply of navels to remedy those shot off soldiers in future wars. The local one will be a well-rounded unit, centrally located, with general headquarters slightly elevated from surrounding terrain. Colonel Solar Plexus will have complete charge of the unit. “This Navel business pains me in the middle”, ten Hoor said, “but it may work out in the end, as everything else does. Next thing they may be taking our stomachs. Oh well, Let’s hope for the chest.” Officials of the Reserve sent piles of literature to the university explaining what a touchy subject the unit is with most people. Motto of the Navel: “You may beat us in the end but we’ve got you in the middle.”

Harris’ effort didn’t end with sending the application to the Bureau of Navigation. He mustered considerable political support for Tulane’s application for a Naval ROTC unit, including: US Senators Allen Ellender and John Overton, Congressmen Maloney and Fernandez, Louisiana Governor Leche and Col. Lewis Kemper Williams, Chairman of the National Defense Committee and member of the New Orleans Association of Commerce. They launched a significant influence campaign that reached high levels as evidenced by the May 17, 1938 letter from Senator Ellender to Col. Williams.

On May 31, 1938, advance notice of Tulane’s selection was kindly provided by Rear Admiral Adolphus Andrews. Official notice via telegraph was received the following day. Along with congratulatory correspondence.

Putting this into perspective, Tulane was one of the two selected out of 25 applicants for a new NROTC unit in 1938, an 8% chance of success given even odds. In its favor, Tulane had well established professional programs in medicine, law, engineering, architecture and commerce that would be of interest to the NROTC program.

In response to the unanimous recommendation of Tulane Alumni, President Harris pursued and gained the Naval ROTC unit in 1938. He overcame local resistance and mobilized for political support.  His continued engagement of the Navy during WWII paid significant dividends for Tulane. From “The Emergence of a Modern University”:

President Harris was co-author of the GI Bill (signed 1944), a program that was largely responsible for the creation of the American middle class. Returning veterans with GI Bill paid tuition filled the halls. From President Harris’s message in the 1947 Jambalaya: “A policy giving preference to former students and those with superior high school records was worked out … During this session there have been more students in the University than at any time in its history.”

In hindsight it is easy to conclude that Naval ROTC was critical in the emergence of Tulane as a national university. During WWII Tulane produced over 2000 Naval Officers (compare to the US Naval Academy’s 3500). These veterans returned to the USA as Tulane’s first national alumni.

Rufus Harris believed in the benefits of Naval ROTC. His two sons, Rufus Jr. and Frank were Tulane Midshipman and served in the US Navy. 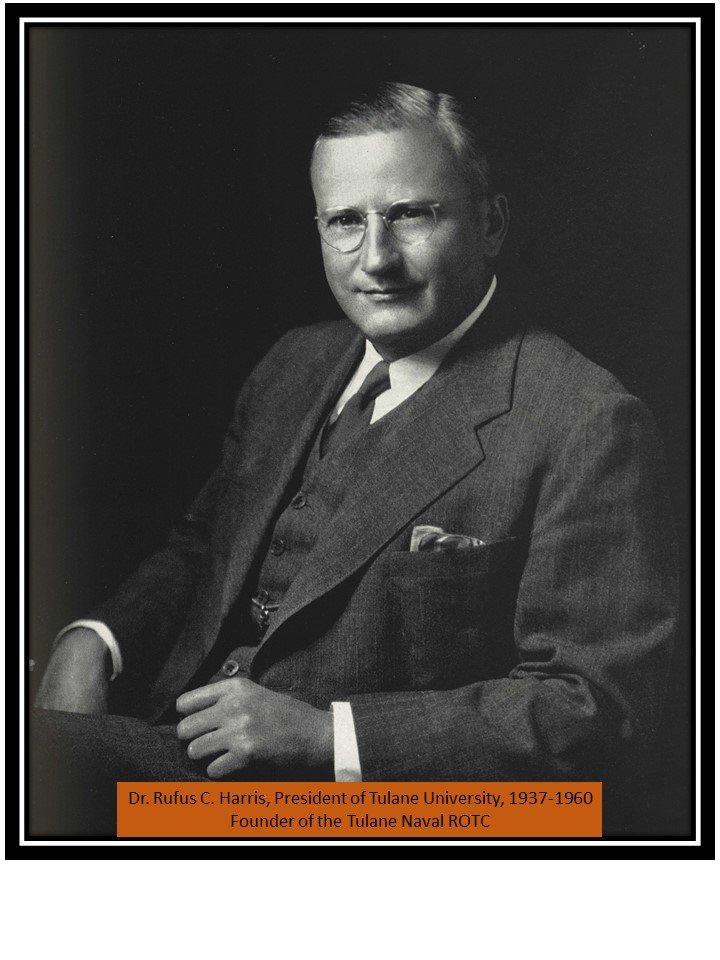 The Purpose of Naval ROTC

Before telling the story of the formation of the Tulane Naval ROTC, a brief introduction of the purpose of the ROTC is in order for our civilian audience. As can be seen from many documents in Tulane’s archive, the civilian perception of ROTC is often limited to “marching about and target practice” at best or “teaching our young men how to engage in the tactics of warfare and mass murder” at worst. A statement made by John Paul Jones to the Maritime Commission in 1775 regarding “What a Naval Officer should be” is exemplary of the goal of the ROTC program:

“It is by no means enough that an officer of the Navy shall be a capable mariner. He must be that, of course, but also a great deal more. He should be, as well, a gentleman of liberal education, refined manner, punctilious courtesy, and the nicest sense of personal honor. He should be the soul of tact, patience, justice, firmness and charity. No meritorious act of a subordinate should escape his attention or be left to pass without its reward, if even the reward be only one word of approval. Conversely, he should not be blind to a single fault in a subordinate, though, at the same time, he should be quick and unfailing to distinguish error from malice, thoughtlessness from incompetency, and well-meant shortcoming from the heedless or stupid blunder. As he should be universal and impartial in his remarks and approval of merit, so should he be judicial and unbending in his punishment or reproof of misconduct”

Naturally, the Naval ROTC program includes navy specific technical education in areas such as navigation and ship handling. But more importantly, through personal example and instruction by the unit’s staff, and extensive direct leadership experience in the midshipman’s military command structure, the ROTC program develops these traits and skills in the young men and women who will become officers in the Navy and Marine Corps at the end of their undergraduate education.

Documents shown in this compilation are from the Tulane University Archive, specifically the Military Series (1917-1970s), Box 4 – Army and Navy ROTC. I am grateful for the help from Ann Case, University Archivist, with navigating their impressive collection. Box 4 contains documents for the establishment of the Naval ROTC and unit Commanding Officer correspondences and other documents from 1938 through 1970. Additional significant insights were provided from the book “Tulane – The Emergence of a Modern University, 1945-1980” written by Clarence L. Mohr (a Tulane history professor) and Joseph E. Gordon (Dean emeritus of the College of Arts and Sciences). This book is an authoritative history on Tulane, chartered by Tulane University and advised by a Tulane appointed committee