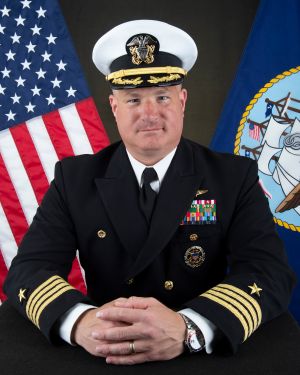 Captain Kevin Kennedy (92) has assumed command of Naval ROTC at the University of Virginia.

Captain Kevin Kennedy graduated from Tulane University in 1992 with a Bachelor of Arts Degree in History and was designated a Naval Aviator in November 1994. He is a 2006 graduate of the Australian Command and Staff College in Canberra, Australia and earned a Master in Maritime Studies Degree from the University of Wollongong in 2007.

He has completed three tours as Commanding Officer starting with HS-15 in San Diego, HSC-25 in Guam and the Helicopter Sea Combat Wing Pacific in San Diego.

Excerpt from change of command address:

“We are very much a profession of arms,” Kennedy said. “The nation faces peer competition again, for the first time in a long time, and we need people who are able to lead men and women in combat in that environment. I think it is important that those officers are highly educated and understand the world – not just trained, but educated, knowing how to think. I think UVA does a great job teaching these students how to think. We need smart, well-educated, well-rounded officers to lead us in that challenge, and I think I can guide them through that.”