Activated in 1961 with Skywarrior. Deployments to Western Pacific aboard USS Constellation (CVA-64) and participated in Gulf of Tonkin incident. Operated as detachment squadron with deployments to Southeast Asia and to Mediterranean and Atlantic Ocean.  Unit was redesignated VAQ-129 in September 1970. 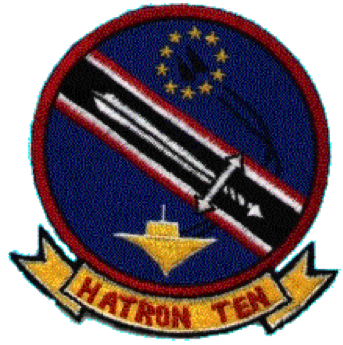 Commissioned at NAS Whidbey Island, Washington, on May 1,1961, VAH-10 was the last HATRON to be activated. It received its first A3D-2s six weeks after being organized. As part of CVG-8, the squadron took part in the shakedown cruise of the USS Constellation (CVA-64) in March-April 1962. During the following two years, VAH-10 deployed twice to WestPac aboard this carrier. It was there that VAH-10 and the other CVW-8 squadrons provided some of the first naval aircraft to go into combat in Southeast Asia as the Constellation was involved in the August, 1964, Gulf of Tonkin Incident.

Back at Whidbey Island in February, 1965, the squadron enjoyed a short leave before departing for the Med aboard the USS Franklin D. Roosevelt (CVA-42). Thereafter, VAH-10 became a detachment squadron, with its Skywarriors deploying seven times to the Gulf of Tonkin between June, 1966, and August, 1970. Other VAH-10 detachments continued to operate A-3Bs and KA-3Bs aboard carriers of the Sixth Fleet in the Atlantic Ocean and Mediterranean Sea. While Det 62 (USS Independence CVA-62) was deployed to the Med from June 70 to Jan 71, they became VAQ-129 as a part of the redesignation process. It is reported that they even sported dual logos during this cruise.

The last operational HATRON, as VAH-2 and VAH-4 had been redesignated TACELRONS in November, 1968, VAH-10 finally followed this path and was redesignated VAQ-129 on September 1, 1970.