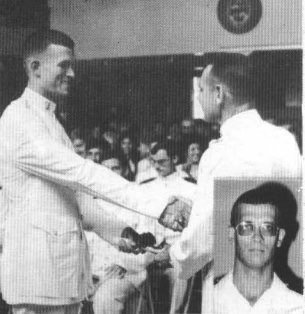 Charles Aloysius Romans Jr., age 47, died at 3:33 p.m. Monday, December 23, 2002, at home in Durham. He was the beloved son of the late Rosemary Giovingo Romans and Charles A. Romans, brother of Regina Rose Romans Douvillier, and brother-in-law of Harold J. Douvillier Jr. He is survived also by his very special friend, Greg Tuchek, and his Wheaton terrier, “Ziggy.” He was predeceased by another very special friend, Steven Allan Benton; and Great Danes, “Beau,” “Bosko I,” “Gunther,” and “Bosko II.”

A native New Orleanian, Charlie was a graduate of Brother Martin High School and Tulane University (1997). A 15-year veteran of the U.S. Marine Corps, he attained the rank of major prior to retirement.

A Mass of Christian burial will be offered at 11 a.m. Friday from Holy Infant Catholic Church, with Fr. John McGee, OSFS, presiding. Friends will be received at the church from 9:30 a.m. Friday until service time. Charlie will be buried Monday in New Orleans following a Mass in St. Rose of Lima Church.

Memorial donations to a charity of one’s choice, or, at Charlie’s request, that those able do some volunteer work. Hall-Wynne is serving the Romans family.